When my parents renovated the basement of my boyhood home, they added a bathroom, and of course it included an exhaust fan. Even though it was noisy – like most bathroom fans back then – we used it diligently, during and after showers, as you’re supposed to. Did it serve the purpose? Not really. In a few years the brand new white ceiling was beginning to grow black mold. The room smelled musty, too. Sound familiar?

As I’ve learned since then, choosing and installing an effective bathroom exhaust system isn’t as easy as it seems. There are hidden considerations that make the difference between a useful installation, and one that just makes a racket. Here’s what you need to know to keep fresh air flowing.

It’s pretty obvious that the purpose of a bathroom fan is to transport moist air from inside to the outdoors. Drier air is then sucked into the bathroom from the rest of your home, which is then replaced by natural air leakage through doors and windows. What’s less obvious is the importance of fan capacity. Way too many bathroom fans are too small. So how much capacity is enough?

Bathroom fan capacity is rated in cubic feet per minute of air moved, or “cfm” as it’s abbreviated. The ideal cfm rating depends on the volume of your bathroom, measured in cubic feet. A fan should be able to completely change the air in your bathroom at least 8 or 9 times an hour. I aim for 10 to 12 changes per hour when sizing fans on my jobs. This is the recommended flow rate for Canadian conditions, which demand rapid air exchange because of the increased tendency for condensation to occur during cold weather. Slower air movement rates may be recommended on fan packages printed in warmer climates, but don’t be fooled. We need more. To calculate the minimum cfm rating (assuming an 8-foot high ceiling), multiply your bathroom’s length by its width (in feet), then multiply this answer by 1.08. 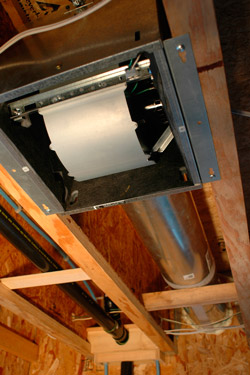 How often would you use an exhaust fan that sounded like a blender making ice chips? Not often. That’s why manufacturers are constantly working to decrease the sound levels of their fans, making them more pleasant to live with. To ease confusion for consumers, you’ll find industry wide noise ratings printed on fan packages everywhere. Pay attention because these mean something. The unit of sound measurement in the ventilation business is the “sone”. You’ll have no trouble finding bathroom fans with a sone rating of 2; some even drop below 1 sone. The quieter the better.

While it’s the job of a bathroom fan to move air, it’s the job of the ducting connected to that fan to direct the air outdoors, with a minimum of restrictions. Improper ducting handicaps a good exhaust fan to the point where it can’t move enough air to be effective. And according to what I hear from readers, lots of bathroom fan troubles originate with improper ducts.

There are two reasons why bad ducts are so common: laziness and lack of knowledge. Laziness is the reason why an installer ends a bathroom vent pipe in the attic, instead of venting it outdoors, either through the roof or a wall. Venting into the attic is bad because this part of your house can’t handle moisture any better than your bathroom can. It simply offers the dubious advantage of moving the moisture problem where you can’t see it. Mold, rot and soppy ceilings will eventually catch up with you, though.

Lack of knowledge is responsible for ducting problems that run the gamut from installations that are much too long and restrictive, to those that funnel condensed moisture back down into the fan and your bathroom during cold weather. Avoiding these troubles depends on understanding the different ducting options and how they should be used.

There are two kinds of vent ducts that can do a good job for you in the bathroom: rigid duct, and flexible insulated duct. The rigid stuff offers the advantage of smooth inner walls that ease air flow. On the downside, rigid pipe doesn’t come wrapped in factory-applied insulation, so internal condensation will occur during winter if it’s used through unheated areas. That’s why your best bet is flexible ducting with a built-in insulating sock and tubular vapour barrier that stops moisture from condensing until the moist air gets outside.

Most homes have loud, ineffective bathroom fans, just don’t think this is inevitable. A good bathroom fan moves moisture outdoors quietly and quickly, so don’t have to accept anything less.

Steve Maxwell is Canada’s Handiest Man. An award-winning home improvement authority and woodworking expert, he’s truly a treasure of home wisdom and the ultimate home GURU. Be sure to visit his site at SteveMaxwell.ca. 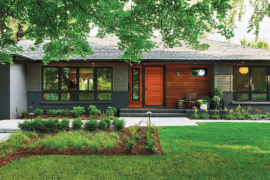 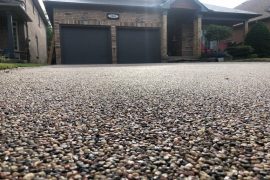 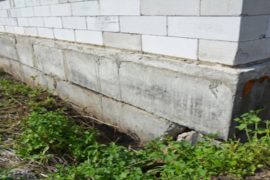